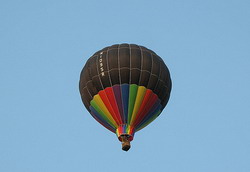 The fact that Lake Balaton is the largest one in Central Europe can be best understood when taking one of the flights over Lake Balaton.

Many small private entrepreneurs offer individual sightseeing at Lake Balaton, so that the route of flight can be chosen by the tourist. There is, for example, the possibility to fly over the castle of Szigliget, the Festetics castle, Badacsony volcano, and of course over all the resorts of Lake Balaton.

When deciding about a flight, you can choose between a twin-engine and a single-engine plane. You can even choose a flight on a glider. It is really an adventurous way to explore the lake.

Flights at Lake Balaton cost on average 150 euros for a flight lasting about 60 minutes. Some airline companies also act as flight schools and even offer training for piloting engine aircraft and gliders.

Flights at Lake Balaton can be also performed by helicopter, too. Anyways, there is a slightly cheaper option, for a group up to 12 people a small plane can be hired. Flight season for most airlines lasts from May to September, but some companies also offer flying over the winter enchanting scenery.

Among the flights in the broader sense, there are flights in balloons available. These flights can be hardly described, because the view of the world is so different from what we usually see. Balloons usually depart from Heviz in the summer months from the shore of the lake in the late afternoon, so balloons fly directly into the sunset!

A beautiful landing strip for aircraft can be also found in Balatonakali. There are several ultralight aircraft available for tourists, which is controlled by experienced pilots.

Flying in a small private aircraft is completely different from what you usually experience in large passenger aircraft. But for those who dare, a flight over the lake, however, will be an unforgettable experience.