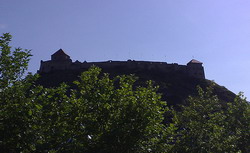 Between Sopron and Lake Balaton the Sumeg castle is located (20 miles north of Lake Balaton). The towers of the castle are 80 meters high and made from limestone. It will not be a problem to find an appropriate cottage or an apartment around this historical area.

The paved road leading to the castle is really bumpy and it is easy to underestimate the complexity of getting to it. The climb is worthwhile not only because of the excellent view over the city and its surroundings. Today Sumeg Castle invites its guests to medieval time travel and immediately begins welcoming directly at the gate.

The castle was built in the late 13 century, and was mentioned for the first time in 1301. It was a gift from the Hungarian king Stephen V to the Diocese of Veszprem. But at that time it consisted of only one tower, cistern and a few other premises. Only in 15th century the Sumeg castle was further expanded and acquired fortified walls. It experienced multiple sieges, but wasn’t conquered for a long time. It even survived during two fires. Since 1989 till today the Sumeg castle is one of the most attractive and spectacular tourist destinations in the Balaton area.

Even though there are some building in baroque style and some were renovated: the bishop's palace of Bishop Márton Padányi-Biró (1755), the Franciscan church and the monastery (both 1653) and the Roman Catholic parish church (1757), it still looks in perfected medieval style and many dances, fests and tournaments are held here. Squires and damsels in richly decorated costumes can be seen in the Knights’ Hall in winter and at the Castle Arena in summer. In the venerable walls of the Sumeg castle you can observe knights tournaments, be thrilled be exciting sports and game types with the usage of glorious weapons, be a spectator of the battles on horseback or on the ground for the hand of a beautiful damsel.

A visit to the torture chamber, the stables, the Arms and Carriage Museum at the castle Sumeg is also included.

Please state what times and dates the Knights Tournaments are on. I cannot find the answer anywhere.