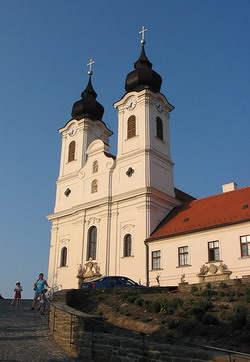 Tihany Peninsula divides Lake Balaton into two basins: the bigger southern basin and the smaller northern basin. It enchants tourists because of its beautiful nature. Actual landscape of the peninsula was formed by volcanic eruptions millions of years ago. The remains of the craters formed two small lakes, which are not connected with Lake Balaton and located above the water level of Balaton. These lakes are: Belso-to, which is especially respected by fishermen and Kulso-to, which is particularly popular among the water birds.

As a result of volcanic activity, hot mineral springs created more than 100 hills with geysers on the peninsula. The most beautiful of them is called Aranyhaz (“Golden House”); its rocks are covered with golden lichen. In addition to its geological features the peninsula is also known for its exclusive wildlife: in 1952 its territory became the first nature reserve in Hungary.

Archaeological excavations on the peninsula have shown that it has been inhabited since prehistoric times. This place was attractive for people of Bronze and Iron Ages, and enjoyed the popularity in the Roman Empire. The ancient Romans called Lake Balaton – Pelso (from the Latin - Lacus Pelso), and had a fort on Tihany peninsula. Tihany settlement appeared in the Middle Ages, when King Andrew I founded here in 1055 a burial place for the royal family and built a monastery for Benedictine monks. Since XIII century Tihany Abbey was in charge of making different official decisions (locus authenticus). During the Turkish wars in the XVI-XVII centuries the monastery was redesigned into a fortification and then destroyed. The monastery was rebuilt in XVIII century in Baroque style and it became a symbol of Tihany Peninsula. Some years ago Benedictine monks were put in charge of looking after the monastery and the museum of Abbey.

Nowadays tourists are invited to use a ferry, a harbor with yachts, as well as magnificent beaches. Affordable apartments, cottages and hotels – it will not be difficult to book any of them in Tihany. Among the attractions are: the Benedictine monastery, the crypt of Andrew I, the Calvinistic church-belltower, wine cellar built in 1822 on the northern coast of Lake Belso-to for processing and storing wine for the needs of Abbey. By the way, even now this wine cellar offers the best local wines! The biggest building on the peninsula was built in XIX century – it is a granary of Abbey. Today it belongs to the public center of the town, which has repaired it; and now it is used for cultural and social events.

Tihany is especially important not only for Balaton region but for the entire Hungary. Since 1960 uncountable number of tourists from Hungary and foreigners has visited Tihany. The main features of the peninsula – its historical and cultural relics, associated with the monastery, unique landscape and regional capabilities of Balaton - annually attract millions of tourists all over the world.